Every year the Solent is home to many yacht racing events, this year is no different. 2019 see's the return of the biennial Rolex Fastnet Race and welcomes newcomer SailGP during Lendy Cowes Week.

Whether you want to take part in the race itself, or just take in all the action from the water as a spectator, you'll find the event for you below. 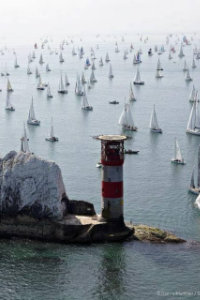 Round the Island Race - 29 June

Round the Island Race is a fantastic event that sees world-renowned sailors competing against families, Sailing schools and first-time racers. Around 1400 yachts take part, making it one of the largest races in the world!

Set in the beautiful Western Solent, right near The Needles, this three-day regatta is the ultimate mix of competitive inshore racing and champagne! Sponsored by Taittinger Champagne and hosted by the Royal Solent Yacht Club from Yarmouth, this is a weekend you won't want to miss. 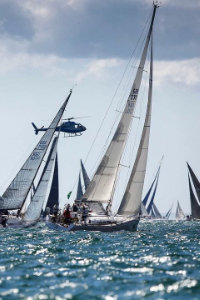 The Rolex Fastnet Race is one of the most exciting and challenging offshore races in the worlds. This year, the 340 entry limit was full in us 4 minutes and 37 seconds! The race starts off Cowes a the Royal Yacht Squadron line, then the fleet head out of the Solent past The Needles and along the South Coast of England.

Since 1826 Cowes Week has played a key part in the British sporting summer calendar and is one of the UK's longest running and most successful sporting events. It now stages up to 40 daily races for around 1,000 boats and is the largest sailing regatta of its kind in the world. 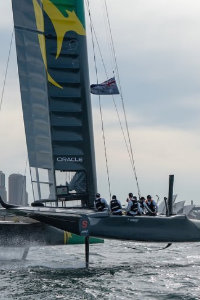 This spectacular race event will take centre stage in the Solent, partnering with the already world-famous Lendy Cowes Week, and promises to deliver amazing racing action to the competitors, fans and visitors. The rival nations will race head-to-head on the newly redefined F50 foiling catamarans at speeds of over 50 knots (60mph). You don't want to miss this one! Learn more about SailGP here

The LBCC is the largest industry regatte in Europe, bringing together hundreds of people from the property and construction industry to sail, socialise and fund-raise. Over the past 30 years, the Little Britain Challenge Cup has raised over £1.25 million!

During these events, marinas will get very busy, so we advise booking ahead of time (where possible) to avoid disappointment.

Want to do more than spectating? Why not try racing yourself!
Take a look at our racing opportunities page on our Sailing School website here

We had a fantastic weekend sailing on Loxley B. Boat in super condition and spotlessly clean, Alex. and the team very thorough and always on hand to answer any questions. A great experience. We will be back. Thank you!

Our first but not last charter!! (CT)

Lots of information from office with a friendly service. We selected a one of the cheaper yachts and was please with find everything work and was cleaned and tidy. We will definitely be back

This was the first time we had tried chartering and as experienced racing sailors we didn't know what to expect. Covid has closed down all our events this year so this was a chance to get afloat at least once in 2020. What a great experience and Alex and all the Hamble staff could not have been more friendly or helpful. We had a great three days and we will be back !! We would have no hesitation is recommending Hamble Point Yacht Charters.

From initial enquiry to handing the boat back, the service and attention to detail was fantastic. Very prompt service for the minor niggle we did have and with a wide selection of boats to charter, I'll certainly be back. One of the USPs of this business is they are right by the entrance to the Hamble so it's very quick to get out into the Solent compared to other marinas further up where it can take 30-40 mins or more just to reach Southampton water. Big thanks to Alex and the team, we had a great week on a very well kept boat

Professional, efficient and friendly. The booking and admin process was straightforward, the handover was well organised and Covid compliant. Most importantly the boat, a Sun Odyssey 37 was in great condition and very well equipped. We will definitely use this company again.

A short email to say thank you to you and all your team for a fantastic yacht charter and for all your help with our booking at such short notice.     Apaloosa is a lovely yacht and very well equipped.   Hamble Point Marina is a great base to explore from – and my first time sailing from there, although my husband has been a few times.

I would also like to praise our skipper, Dave.    He was excellent company, very patient, great at explaining manoeuvres and very happy to involve the children so that they could learn too.    Given the weather conditions and our rusty knowledge, it was very reassuring to have him with us.   Dave was very happy to impart his knowledge and he ensured we made the most of our short charter.     We would definitely request him again!

So, thank you once again, it was great fun, and have a good weekend.

One of the larger charter companies which means they have a large fleet and permanent office staff, a big plus. I chartered Loxley B (37ft Sun Odyssey). Boat was clean, well equipped, well maintained. Office staff was really friendly and efficient in answering questions quickly. Will use this company again.

Thanks to all again for a great charter and the effort taken to make the handover so efficient. Especially with the videos

First time using Hamble Point Yacht Charter and will definitely be back. Location, range of boats and value for money all excellent. The team was very friendly and efficient, and the boat we chartered (Blue) was in good condition and well equipped.

A weekend on Blue (JY)

Chartered 37 Hallberg Rassy for a weekend mid Jan. Booking process and communication prior to booking was friendly and informative. The yacht was immaculate and had everything we needed for the weekend. Simple check out process, lots of information provided in the personal review of the yacht. Returning the yacht was just as simple and the security deposit was refunded within 3 days. Highly recommended, we will be returning customers.

We comprised a group of 5 friends; Chartering Kasara, a well appointed Halberg Rassy 36, for a long weekend, taking part in the Round Table Area 45 Presidents Rally.The boat was clean and ready for our arrival, and we were away in good time, she sailed well and when we returned on the Sunday evening the hand back was quick and easy.We all agreed we had had a great time, and would charter again in the future

Hi, I've chartered bareboats from Hamble Point Yacht Charters on a number of occasions - mostly weekends, working my way through their fleet of yachts. Really friendly people, swift to respond. Boats are always in good condition, ready to sail. Their location makes it easy to get to the Solent swiftly. Highly recommended

Just a quick one to say thanks for all your help over last couple of years which has been leading up to me getting my Yachtmaster Offshore award. First rate service both on the sailing school and chartering side.

Looking forward to taking more boats out and going on other sailing ventures with you guys next year!

Finally, just to say that the examiner was outstanding as an Examiner. Really friendly chap and really wanted me to pass. Would also help in giving tuition about alternative ways of doing things after I had completed a manoeuvre.

First Rate Service (DD)
It’s been a pleasure chartering from you- you are a top class team! (SG)

August 2019. We had an excellent sailing trip around the Solent, staying at a different mooring each day, sometimes in marinas, sometimes on mooring buoys. Hamble Point Yacht Charters was a perfect choice for us. Their location at the mouth of the Hamble river is absolutely ideal, giving immediate access to the central part of the Solent. The company is super efficient and very friendly, and they provided an outstanding service. The boat was in good condition, clean and eveything working. We have chartered with them a couple of times now and we will be back!